A day off training today. After walking in the Brecon Beacons on Thursday, I fancied going back with the camera and spending the morning taking some photos of the waterfalls and the snow covered mountains. I stopped on the way at a waterfall I had seen a couple of times whilst driving past in the car. A short but steep walk back up the hill and then an even shorter but steeper slip down the river’s edge got me to the perfect viewpoint, and I took some long exposure frames.

From there, it didn’t take long to get to the Storey Arms and I’m glad I wasn’t planning on climbing Pen y Fan as the car parks were full. Later, I saw that the popular route up to Corn Du was packed out with people.

Instead, I parked in a layby just down the road and went to one of my favourite waterfalls, a few hundred yards beyond. I was surprised to find the lowest part of the waterfall encased in scaffolding; on closer inspection, it seems that repairs were being made to the wall that separates the waterfall from the road. I guess someone must have clipped it recently.

While I was snapping away, the snow started and I glanced nervously around for any sign of thunder clouds. But it was just a light shower and I carried on once the sun came out again. This waterfall got me back into photography after I’d had enough in college. I don’t visit it often, but I try to get back now and again as it has an interesting pattern of falls.

I walked over to the Storey Arms and back down the old road to another waterfall I’d spotted from the previous one. It rained while I was there and for a moment, the black cloud that accompanied the rain had me looking and listening.The legacy of my Christmas Eve adventure will last a while, I think. But it was just rain and a short shower at that, so I got my photos and headed back to the car. 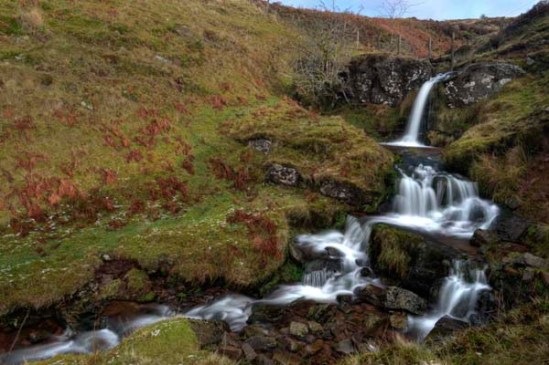 I drove back to Pont ar Daf, where the old Brecon Road diverges from the line of the new one. The old bridge – ‘Pont’ – over the Taf (Daf) was rebuilt in 1941 according to the carved stone on it’s east wall. There is a line of anti tank blocks that blocks the ground either side of the old road.

In the 40’s, there would have been a moveable road block on the road too. This stop line was covered by two pill boxes near the start tot he path up to Pen y Fan. On a whim, I decided to explore the opposite side of the road, where I guessed there would be more defences. I expected to find an infantry trench overlooking the blocks and sure enough, around 150m up the slope to the west were the remains of a 10m slit trench.

Back to the car, and I drove down to Cwm Crew, where a photogenic tree catches the mid morning light. Then it was time to head home. I found that I was quite tired despite the lack of hill climbing and it was only when I started writing this that I realised I’d actually walked quite a way carrying a heavy back pack of camera equipment.