I’ve always been interested in local history. While I was still in school, I attended local history lessons and since then I’ve taken an interest in the subject. I never studied history in school and that’s one of my regrets. I’m particularly interested in the military history of the area and that probably stems from the stories my mum used to tell me of the Swansea Blitz in February of 1941.

Swansea was used as a staging post for troops involved in the invasion of occupied France on D-Day. The bay was full of transport ships and the farmland around was full of American soldiers. Very little, if anything, of this remains today. Most of the visible signs of the area’s war lie in ruins. There’s a pillbox on Swansea Bay, opposite the University. I haven’t been able to find anything out about when it was built or if there were others, but it sits alone, half buried in sand. It’s seaward face has no embrasure and it was clearly intended to provide enfilading fire, that is to shoot at the enemy from their sides. You see it on the German defences on the beaches of Normandy and elsewhere.

A now ruined radar station sits of Rhossili down. Another is sited near Oxwich Point. A third sits overlooking Port Talbot. All kept watch on the Bristol Channel.

More pillboxes defend a possible invasion route from the west towards Swansea along natural obstacle of Clyne Valley. One is hidden opposite the Railway Inn in Killay.

There are a number of anti-aircraft gun emplacements on and around Kilvey Hill, protecting the oil refinery and industrial areas of Swansea nearby. My mum told me of an anti aircraft battery, including ‘Z’ rockets (unguided surface to air missiles) sited on the playing fields near Singleton Hospital. The rockets were secret at the time. Another battery of heavy guns were sited on Mumbles head, above the Yacht club My uncle recalls that the sound of these 5″ calibre guns firing was totally different to the smaller 3″ guns nearer the city.

Lower down on the slopes, on a now flat and empty piece of the hill overlooking the lighthouse, a battery of anti shipping guns were located.

On the tidal island which is home to the lighthouse, there are searchlight houses.

Part of the buildings that for the lighthouse were originally a 19th Century fortress and gun battery.

Swansea airport was originally built as a fighter station in 1941 on land that was so boggy it had to be filled in with thousands of tons of industrial waste and rubble (which took a year to complete). Over the war years, it was home to a number of squadrons and became  a base for anti shipping strikes, night fighters and eventually the home of a weapons training facility.  The aircrews would practice shooting, bombing and strafing on nearby Whiteford and Llanmadoc bays. Fragments and unexploded ordnance is still being found there – last year an old gas shell was still potent enough to affect the ammunition technician sent to dispose of it.

Recently while walking around the area with Rufus, I came across several reminders of it’s past including an area of slightly higher ground which seemed to have been a defensive point. The faint indentations of several trenches could be seen, along with a deeper concrete lined one and the mounting for a small artillery piece of heavy machine gun. 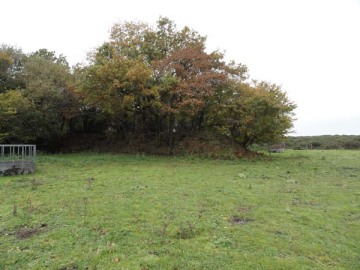 Fighter dispersal pen. Each metal feed trough is placed where a twin engined fighter bomber (probably a Beaufighter) would have been parked. The earth bank between them would have protected them from bomb damage.

Until a few years ago, I had an old Anderson shelter in the garden. I remember as a boy seeing several such shelters in back gardens around the area, most still buried as was suggested when they were issued. The wall of the old police station in Swansea is pitted with shrapnel damaged bricks from a bomb that fell in the street. Looking at the records for the bombing of Swansea, at least one house near me was destroyed by a bomb, and many others were damaged. There is a story that a stick of bombs fell close to the nearby further education college and a rumour persists that one landed in the marsh on which the college is now built, and failed to go off.

There are many such structures in the UK and many more that have been lost over the years since they were built. They are a valid part of our history in the same way as castle, churches and bridges are. I hope we don’t lose sight of that just because they are a reminder of an unpleasant chapter of history.