I’ve taken some time over the years to turn my garden from a chaotic mess to a planned mess. I don’t like gardening, so I wanted a low maintenance space where wildlife could find a refuge but that I could enjoy and move through without risking attack from wild animals. When I started, I didn’t know what was living in there and risked serious injury every time I ventured beyond the patio. Little by little (as I said, I don’t like gardening), I tamed the flora and catalogued the fauna. It took 5 years to manage a large patch of brambles and unidentified bushes and I discovered a small pond beneath the undergrowth. I removed old ornamental bushes, spent a few years growing apples before the apple tree stopped working and generally managed the garden back to something I’m happy with. It took 10 years altogether.

An important part of the plan was to create a space that insects and birds could thrive in. I also wanted to grow vegetables and continue to harvest the blackberries that appear every year. It’s only in the last couple of years that the plans have started to bear fruit (yes, pun intended).

And so to this year. After Rufus passed away, I decided to encourage the fox back into the garden and if you’ve followed my social media posts you’ll have seen that it was successful. I used to see her often when Rufus and I went walking around the houses in the evenings and before he lived with me she was an occasional visitor as a young vixen. But this year it was obvious that she was suckling young and I was rewarded when she started bringing her cub with her. It was playful and inquisitive and while she ate from the bowl, it would wander about looking into the bushes and under the spud plants. She would feed it from her mouth and it would have a snuffle around the bowl before they both disappeared again on their way to their next meal.

A couple of weeks ago I was attracted to the garden by the sound of several crows squawking and making a fuss in the sycamore tree. It was clear they weren’t happy and my immediate thought was that the fox cub was somewhere at the top of the garden. I chased the birds away and in doing so, disturbed the cub who darted into the garden and under some bushes. Not wanting to scare it, I headed back to the house but the cub almost immediately darted back to it’s hiding place in the rubbish at the top of the garden, where I let it be. The crows didn’t return and I avoided any unnecessary disturbance. The cub accompanied it’s mother that evening and I was happy.

Sparrows have come to see my garden as a sanctuary. I feed them ( I have to – if I’m a few minutes late filling the feeders they start to make a racket and flit about in the bushes to express their annoyance) and they’ve taken over an old bucket under a bush as their watering hole. Earlier this year, there was the faint sound of romantic bird song and I caught the occasional glimpse of candle lights near the feeders as the boys wooed the girls and not long after I was rewarded with a flock of little sparrows, all making a noise as they tried to fly between branches. You could see they were just learning to fly as their clumsy attempts to land gracefully on branch, bucket and feeder were comical. But over the next few days, they got better at it. For some reason, their gathering place was under the green canopy of my potato plants and I would often see a writhing mass of sparrows dusting themselves in the shade. Trying to count them was nearly impossible and the best I came up with was losing count at 20. I would guess there are between 20 and 25 sparrows regularly visiting the garden.

All those sparrows aren’t good for the spuds. I’ve had to re-cover them several times as their dusting and other antics have exposed the potatoes themselves. There are rows of little indentations in the soil where individual birds have dug themselves baths. I’ve watched them follow each other around like a gang of teenagers, one or two finding a perch and all the rest coming to joint them. Branches sag and birds fall off. There are often scuffles at the water bucket as they all vie for a place on the rim. And while they all fly off into the higher branches when I go out in the garden, they don’t go far in case I’m filling up the feeders. Recently, I have heard the romantic songs and spotted the little candles again so I suspect there will be additions of the flock before long.

Inevitably, where there are feeders there is grain that had fallen from the mesh to the ground. The pigeons prefer this grain and will wait for the sparrows to dislodge it as the youngsters crash into the feeder in their attempt to emulate the older, more skillful birds. I have also noticed that when the sparrows aren’t around to dislodge the seed, the pigeons will jump on the feeder to do it themselves. The pigeons (and a couple of doves) chase each other around the garden on foot, waddling along the lawn to make sure that everyone knows who the boss is. Of course, there is a different boss every day. One pigeon, not having any interest in all the fuss, just settles down in a little dip to sunbathe. But the real pigeon combat takes place out of sight in the sycamore tree. They go up there to loudly settle disputes and I wouldn’t be surprised if a little betting goes on as well. The pigeons love drinking from the water bowl I have set up on the patio wall. They dip their beaks and necks in the water and once one comes over to drink, they all follow. I watched five gather around the bowl the other day. There wasn’t room for all of them, mainly because one had decided to stand in the water.

Also inevitably, where there is grain there are small mammals. I’ve seen brown rats climbing the bushes where the feeders used to be sited, balancing out along the branches and reaching out to grab the feeder. I once surprised two who were dining on bird food and in their desperation to get away, they were climbing over each other. Recently, with the fox a regular visitor, I haven’t seen any rats. I did see a small bank vole though – I know because I’ve recently completed a mammal ID course for the National Trust.

I have two regular magpie visitors. I dislike magpies in general and refuse to give them the courtesy of saying the rhyme (“One for sorrow, two for joy etc”) as they used to torment my blind and deaf old stray cat (now long gone). But these two are little characters and have been named for the rhyme. This morning, they were both drinking from a bowl of water I’d set up for the purpose, and then they decided to explore the mostly dry pond. All I could see was the occasional head popping up to see what was going on.

I have a pair of blackbirds that have been regulars in the garden for years. They were here earlier in the year, gathering nesting material from the pond and taking advantage of the sheep’s wool I’d put out for the purpose. But the nest was elsewhere. They’re back again and today they have been gathering more nesting material, and feeding on the dried worms I put down in their favourite quiet spot.

I have seagulls – they steal the food that I put down for the fox. And today, I had a special visitor. I was sat in the garden reading and watching the antics of the sparrows, pigeons and blackbirds when I started to notice everything going quiet. The normally vocal sparrows were disappearing deep into the bushes. The pigeon fighting in the tree stopped. The blackbirds flew off and the magpies followed them. There was no activity in the garden. I noticed a few seagulls wheeling about high up and then a red kite flew low over the garden. It was at the same height as the tree and had taken an interest in my garden for some reason. I managed to grab the camera (it’s always to hand) and went out to get some photos. I expected the kite to fly off or at least climb higher but it continued to wheel and float about 30 feet above me. The gulls weren’t happy but weren’t interfering like they normally do. I had a full five minute flying display as the kite flew off and came back again. It was such a beautiful sight and I felt privileged to see this magnificent wild bird hunting. Ironically, I’d been at the bird of prey centre at the Botanical Gardens on Friday, watching kites on display.

Also in my garden, the visitor can see butterflies (my next project is to try and attract more) bees, wasps, plenty of flies, spiders and in recent years (although not this year) a frog. In the fading autumn evening light, bats can be seen flying over the garden. In the past I’ve had a hedgehog or two. a squirrel, robins, blue tits and starlings. It’s a lovely place to spend an hour or so just sitting and watching (and listening to) the world go by.

I was down at the local pond to grab some sunset shots and also to take some photos of the stars. The sunset wasn’t the best as the clouds rolled in and hid any colour. But there was a nice reflection in the still water of the pond. So I set up and started snapping. As I was looking through the viewfinder, I could hear a faint clicking but I didn’t really register it.

After grabbing some pictures, I looked up to be buzzed by a bat. I could barely make it out against the dark sky but as my eyes adjusted from the bright camera screen to the night, I started seeing more and more. And the noises I was hearing were the clicking of the bat’s sonar and the flapping of their wings. They were darting about feeding on the insects flying above the pond. 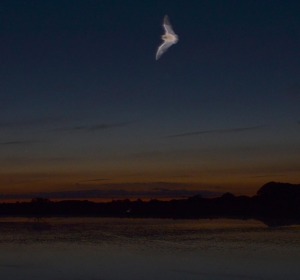 I set up the built in flash (all I had) and guessed the focus and exposure. Every time a bat came within what i thought was the angle of view of the lens, I fired the shutter. Flashes lit up the night sky. I was careful not to fire while cars were passing as the road was close and I didn’t want to distract drivers. After half an hour I had about 30 photos.

I walked back to the car and took some photos of the night sky but I was still thinking about the bats and I didn’t stay long.

I was quite pleased with the results considering I hadn’t planned on trying to catch bats. I’ll be back there with a bigger flashgun as soon as the weather clears.